What is most shocking is the incidence of male breast cancer has been rising significantly over the last four decades.

Why the Increase in Male Breast Cancer?

Little is known about breast cancer in men since research studies for the condition, still considered “rare” by conventional medical standards, are few and far between. According to information from a Lancet Seminars review, however, 90% of all male breast carcinomas are ER-positive.

Just like for ER-positive breast cancer in women, this means that cancer cells have receptors for estrogen and that estrogen can stimulate their growth. Also like female breast cancer, in the majority of cases, it is not the natural estrogens in a man’s body that are causing cancer… but the presence of harmful xenoestrogens.

Xenoestrogens are foreign “invaders” that mask themselves as estrogen. They form in the body in response to long-term exposure to toxins that can be found in:

Xenoestrogens put everyone at risk for breast cancer. When it comes to lifestyle habits, however, studies show that men on average eat a worse diet, exercise less, and consume more alcohol than women do.

Toxins acquired through diet and lifestyle choices may definitely contribute to the rise in male breast cancer over the years. Another major factor is exposure to workplace toxins.

Men’s Workplaces May Put Them at Risk for Breast Cancer

According to the United States Department of Labor Occupational Safety & Health Administration (OSHA), all employees in the U.S. “are entitled to a safe workplace” and “employer(s) must provide a workplace free of known health and safety hazards.” That being said, a study conducted by San Jose State University in California over 20 years ago estimated that in 1992 alone, there were 60,300 work-related deaths from disease.

There were also an estimated 862,200 job-related illnesses in the civilian American workforce. In the majority of industries where exposure to environmental hazards occurs − such as farming, maintenance, construction, and materials moving − men still make up at least 80% (and in some cases, up to 95%) of the workforce.

And what about regulation? The United States Environmental Protection Agency relies on standards established in 1976 (the Toxic Substances Control Act) to determine if a particular chemical is “safe” for the market. But when the TSCA was established, approximately 60,000 different kinds of chemicals were “grandfathered in.”

“Those sixty-two thousand or so chemicals were just accepted as being okay to be in commerce without any kind of EPA risk analysis,” says David Bennett, who led a major review of the issue conducted by the Government Accountability Office in 2005.

A similar phenomena is occurring in the armed forces. The number of both military women and men diagnosed with breast cancer has skyrocketed among military personnel, raising suspicions that chemical exposure may be to blame. Individuals in the military used to be amongst those least likely to get cancer. Now they are one of the highest when it comes to breast cancer.

Military women, for example, are said to be 20% to 40% more likely to be diagnosed with breast cancer than civilian women. This is mostly because there is a higher percentage of military women that hold employment positions that are typically occupied by men − where exposure to industrial pollution is a concern.

According to former Rep. Leonard L Boswell (D-Iowa), breast cancer is one of the most common forms of cancer for military men and women. Boswell attempted to pass legislation in 2009 that would look into the specific causes of this trend. He also wanted to classify breast cancer as a “service-related disability,” opening up the possibility for those diagnosed with the disease to receive Veterans Administration benefits for treatment.

Even though the bill was stalled in committee, a 2009 study conducted by doctors at Walter Reed Army Medical Center supported Boswell’s concerns. And in 2012, President Obama passed the Honoring America’s Veterans and Caring for Camp Lejeune Families Act. This was in response to veterans and families exposed to contaminants at the North Carolina military base. Contaminated water was said to be responsible for dozens of cases of male breast cancer between 1957 –1987. 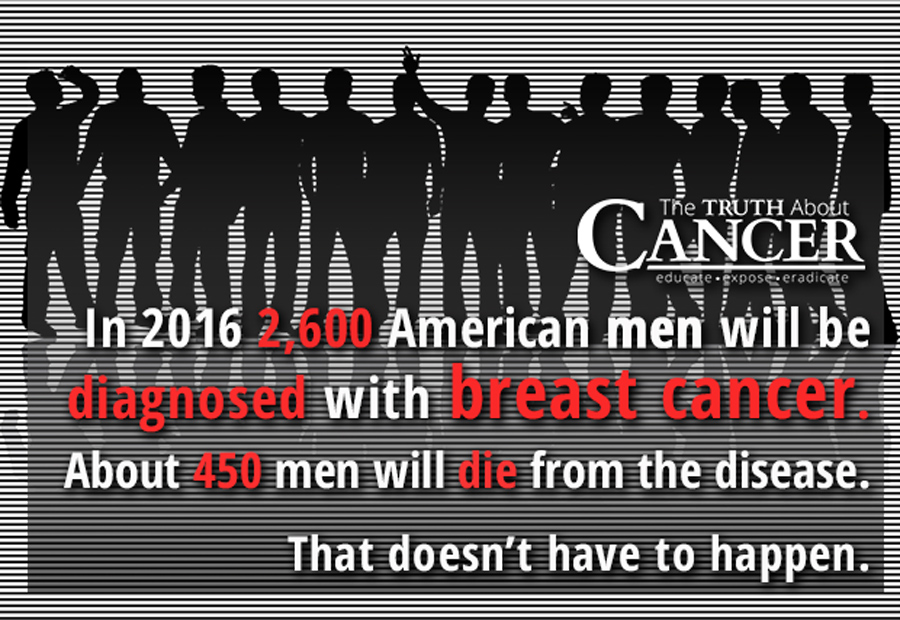 When Should a Man Practice Early Breast Cancer Detection?

According to a comprehensive study conducted by the National Institutes of Health in 2014, amongst the top three leading causes of male breast cancer is obesity. Men with the highest Body Mass Index (BMI) were 33% more likely to get breast cancer. In addition, the following factors will put you at risk not only for breast cancer, but other estrogen-responsive cancers, such as pancreatic, prostate, and lung cancer:

With the exception of those in the military, men who are diagnosed with breast cancer usually do not discover it until later in life. It is typically found when they are in their late 60s or 70s, and most are diagnosed with stage III or IV. There are safe, effective avenues available for men to check for not only breast cancer but the presence of cancer cells in general as well. Screening would also help to detect other abnormalities in the upper chest area.

Thermography is used by thousands of women every year as a safe alternative to breast mammography, and men can use this modality too. In addition, I recommend the Greece and the Oncoblot tests, both of which can detect cancer years before a tumor can be felt as a lump or a bump.

Of course, the best courses of action are preventative: lifestyle and dietary changes you can enact NOW in order to prevent male breast cancer or any form of cancer from ever happening to you.

Do All Breast Cancer Patients Benefit From Chemotherapy?